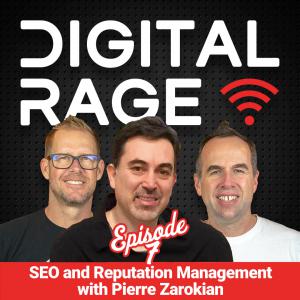 Pierre Zarokian is a guest on the Digital Rage podcast, a show about all things Internet. He talks about evolution of SEO and reputation management industries.

“If you can resolve a problem with your customer, you can even turn the potential negative review into a positive one”.”
— Pierre Zarokian

LOS ANGELES, CA, USA, April 15, 2019 /EINPresswire.com/ — Pierre Zarokian is a featured guest on the current episode of Digital Rage podcast, a show about all things Internet. He offers his perspectives on all things marketing and technology related, covering topics including reputation management and the evolution of the SEO industry. Pierre’s extensive history and expertise in the industry gives him an informed perspective.

Hosts Jeff Byer and Matt Ramage have known each other since junior high school, so the rapport on the show is strong. Matt and Pierre have known each other for several years through mutual friends and also working in the same industry. Zarokian stated: “I am very excited about this new podcast. We covered a lot of issues regarding SEO and the evolution of link building. I think listeners love this kind of insider talk.”

In the podcast Zarokian discussed how he began his work in ‘95 at the dawn of the internet. He was fresh out of college and had just learned the hottest new coding language: HTML. “This was at the beginning of the internet, when HTML was still a big thing,” recalled Zarokian. His instruction led to a web development career that included the Armenian Yellow Pages website.

Zarokian grew fascinated with the idea of building a search database, and it didn’t hurt that the college kids were all launching today’s major web businesses. He wanted in, and began Submit Express the same year that Google launched its search engine. “I knew there was a way to get into search marketing, and the field was more experimental back then,” said Zarokian. He created a website designed to submit any URL to search engines for faster indexing, and he called it Submit Express. 20+ years later and he is still going strong.

SEO’s early days were trial and error, and search engines evolved very quickly by tightening their spam filters. Today, Google maintains more than 300+ ranking factors that complicate SEO. Link building, for instance, was much easier than it is today. Quality matters more, and links have become a more expensive effort as a result. Pierre’s early work with link exchanges put him ahead of the game, but the crash in 2008 and Google’s algorithm made for some choppy waters ahead. At one point, the company was personally penalized by Matt Cutts, Google’s lead engineer.

Pierre provided many tips in the podcast and discussed how Google recently penalized some business review and complaint websites. Devaluing these pages in search has created more opportunities to prevent negative content from becoming a client’s first impression.

Pierre was asked if certain industries are more prevalent in the reputation industry. The answer might surprise you. In Pierre’s experience “dentists” usually have much more negative reviews than most industries . Although service-based professions often suffer from negative reviews, dentists tend to bear the disproportionate weight of bad reviews. Maybe people have a hard time at the dentist?

Major companies can weather these storms, but smaller businesses with negative reviews usually get hurt the most. Pierre recommends trying to work out disputes before the problem is aired online. “If you can resolve a problem with your customer, you can even turn the potential negative review into a positive one”.

Pierre also discussed the future of SEO. He believes that SEO and search aren’t going anywhere for some time, although new technologies will impact the industry. Voice-activated search is an interesting field to optimize for, but it’s still an unexplored field and not on the radar for most clients who want results in search.

SEO has become a field more concerned with traffic from as many sources as possible. Thus, optimization is about effective content generation and smart placement.

To Listen to the full podcast visit https://www.digitalrage.fm/podcast/seo-and-reputation-management-with-pierre-zarokian/

Pierre Zarokian launched Submit Express in 1998 as a search engine submission tool and SEO company. Since then the company has grown into one of the most recognizable brands in search marketing and reputation management, servicing more than 5,000 companies to date. Submit Express is located in Glendale, CA, and was named one of the Inc 5,000 Fastest Growing Companies for three consecutive years.
The company can be found at:
Submitexpress.com and its sister reputation management company at Reputationstars.com

Digital Rage is a podcast about all things Internet. From marketing to technology, they discuss the latest topics and interview leaders in the industry. The podcast is a weekly show that airs Monday mornings. It can be found on iTunes, Google Play, Spotify, Stitcher, and other major podcast platforms. Visit https://www.digitalrage.fm/