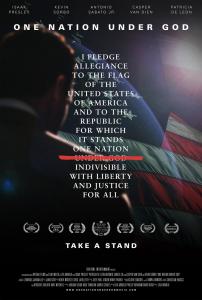 Poster for new film ONE NATION UNDER GOD

Written and directed by Lisa Arnold, who co-produced the hugely successful 2014 “God’s Not Dead”, “One Nation Under God” dramatizes the ongoing debate surrounding the First Amendment, freedom of speech and censorship when a new student at a Louisiana magnet school questions a policy in which the words “under God” are omitted in daily recitation of the Pledge of Allegiance.

The United Nations has declared in its Universal Declaration of Human Rights, “Everyone has the right to freedom of opinion and expression; this right includes freedom to hold opinions without interference and to seek, receive and impart information and ideas through any media and regardless of frontiers.”

“Everywhere we have screened this film, reaction from audiences and festival judges alike has been tremendous,” said Executive Producer Christian Briggs. “Standing ovations have been the norm, telling us that we have a beautifully acted and produced film, and additionally the audience is very passionate about the subject matter of “One Nation Under God.” Free speech is the cornerstone of democracy, and we must hold that right very dear to us.”

Citing the rising demand for and success of family and faith films, Briggs went on to say that the film is expected to open in 200-250 theaters at the outset, then to expand distribution more broadly following that.

When a magnet school teacher in Louisiana (Sorbo) is confronted by a new student (Presley), a young Latino raised by a single mom, who questions the school’s policy toward his First Amendment right to the free exercise of religion, the subject becomes the basis of a debate in a juried showdown with a rival school. Casper Van Dien plays the school’s principal who staunchly defends the policy, and Antonio Sabato Jr. plays a senator who has his eye on the White House, yet whose public comments supporting a place for faith in education get him in political hot water. Football legend Herschel Walker plays himself as an alumnus of the school.