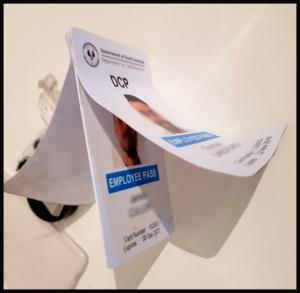 A mother during visitation with her child is supervised by a social worker with an expired employee pass stuck over another identity with the same number.

Is the Department for Child Protection SA sending their social workers into Adelaide homes with fraudulent Employee Passes?”
— –a protective mother

MELBOURNE, VIC, AUSTRALIA, June 12, 2019 /EINPresswire.com/ — A South Australian mother who is presently challenging the Child Protection Department for unwarrantedly placing her child in care, has found that the case social worker allowed someone using a fraudulent Identity pass (on a lanyard) into her home.

The young man was left to supervise, of what is insultingly called an “access” visit.

A day later the mother happened to find that he had left his ID pass behind – it had slipped down the side of a chair. She had not been introduced to him by name, so checked who had been the access worker that had come into her home.

On inspecting the pass, the mother noticed the printing did not seem right — so removed the card from the plastic sleeve. She peeled off the top ID easily, and lo and behold — below was another ID. Maybe they reuse the cards? But then she immediately noticed the many aberrations on the card/s.

Both visible and concealed passes had the IDENTICAL pass/card number.

On the Friday, the mother phoned the department and spoke to someone from general inquiries about the protocols for the Employment Passes. It would seem strange that a department with a $500 million-plus budget would recycle ID cards. She asked whether ID stickers are placed over existing cards. The woman said no, but she'd find out.

The woman soon rang back and said she spoke to Security Team and the people that make the cards. They informed her that,

– they do not reuse social workers cards,
– they do not reuse card numbers on Employee Passes.
– each social worker is assigned a number.
– each card has an expiry date. If an employee goes to a different department, the ID pass is handed back to their manager. That pass is put on hold for 6 months, in case the employee returns, when it can then be activated.
– if the person does not return, the card/pass is deactivated.

The employee pass in question appears to be fraudulent. The reason for this is unclear.

The mother then spoke with, and questioned Person #1 on June 11, 2019. He seemed to be unaware that his pass was lost. Only after two minutes did he say “Okay now I know who you are”. He and his supervisor sped to the house, very keen to retrieve the "badge". As it was night, the mother was not sure whether Person #1 was the man at her home before, "he seemed shorter."

The failings in the system affecting this mother are much greater than a double-printed and expired Employee Pass. That's only the tip of the iceberg. Her case has departmental failings in abundance.