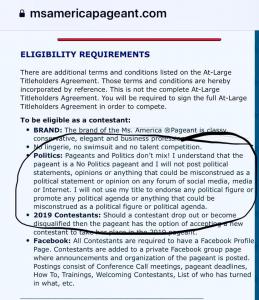 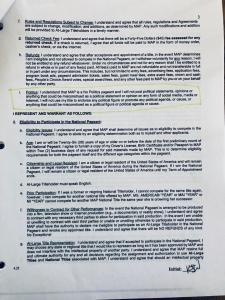 2-No Politics in the contract 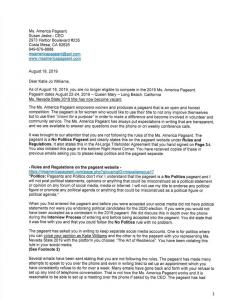 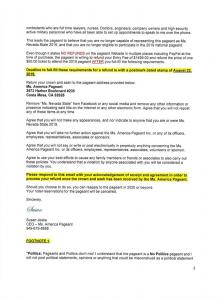 6-Letter emailed to Contestants about the No Politcs policy

Katie Williams is distorting the facts.

COSTA MESA, CA, US, August 21, 2019 /EINPresswire.com/ — The Ms. America Pageant is a no politics pageant. It is in our Rules & Regulations as posted on the pageant website and therefore available to read before applying to the pageant.

ALL the Ms. America Pageant asked of Ms. Katie Williams, in writing, is to keep separate social media accounts. (ie: Facebook) One is for politics where she can voice her own opinion as Katie Williams and the other is a new Facebook page for the pageant representing Ms. Nevada State 2019.

It is also included in our contracts and requires handwritten initials and signatures acknowledging that you have read and understood the pageants rules.
(See her hand written signature below)

The purpose for these Rules and Regulations is that the Ms. America Pageant does not want to be seen as endorsing any political candidate or political cause.

Thru many emails starting in July she claimed she could not comprehend keeping pageant and politics separate on her Facebook pages. The pageant made many attempts to speak to her over the phone to try to resolve this issue. Many times we wrote to her to try to set up an appointment to have a telephone conference, all of which she consistently refuse to do. The pageant believes that a telephone conversation is a reasonable request and was willing to speak to her at any time that was convenient for her schedule.

The pageant gave her a final deadline to edit the Facebook pages which she refused to do. This leads the pageant to believe that she is no longer capable of representing this pageant as Ms. Nevada State 2019, and she is no longer eligible to participate in the 2019 national pageant. Her title has been revoked.

The pageant offered her a full refund on her entry fee and refund on one ticket that she purchased to the pageant after she fulfilled requirements of returning crown and sash and removal of the title Ms. Nevada State 2019 from all social media and the Internet.
(See photo disqualifying Email and offering her a full refund)