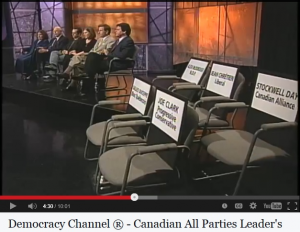 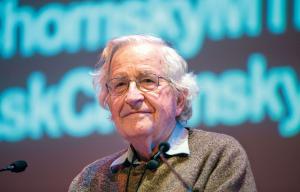 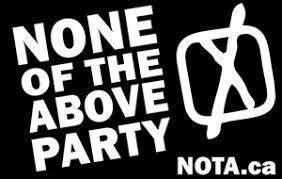 None of the Above Direct Democracy Party

It is quite incredible that elections in Canada today require the intervention of foreign broadcasters and journalists to be fair and democratic, a sentiment many in the USA agree with.”
— Dan Donovan, Ottawa Life Magazine Publisher and Managing Editor

MISSISSAUGA, ONTARIO, CANADA, September 9, 2019 /EINPresswire.com/ — Ottawa Life Magazine and the Democracy Channel have asked WNED and PBS to co-produce and broadcast a Canadian New and Smaller Party Leaders’ Debate moderated by Noam Chomsky to be held before the October 21, 2019 election.

Late Friday, September 6, 2019 Chief Electoral Officer Stéphane Perrault refused a request made the previous day by one of the leaders of the new and smaller parties to order a third leaders' debate for 15 or more new and smaller parties left out of the main debates, referring the matter to the Debate Commissioner whose mandate allows very little discretion.

Perrault had testified before the Parliamentary Committee reviewing the proposed Leaders’ Debate Commission, warning that the exclusion of smaller parties might run afoul of the Charter of Rights and Freedoms, saying “Debates are an important element of the campaign and often contribute to defining the ballot-box issues”.

The “Creation of an Independent Commissioner Responsible for Leaders’ Debates” majority Report of the Standing Committee on Procedure and House Affairs warning that government involvement in leaders’ debates without accommodating smaller party Charter rights would be unconstitutional, was also ignored by the government.

The Committee concluded “Leaders’ debates already have a history of being litigated in Canadian courts. The Liberal majority’s proposal is a prescription for paralysis because it will ensure that this pattern of court challenges will continue, increase and, now, succeed.”

Debate Commissioner David Johnston has so far refused to allow the Peoples Party of Canada leader Maxime Bernier into the main debates with the major and Quebec separatist parties, even though his party has candidates nominated in almost 95% of the ridings for the October 21, 2019 election, the second most number of all 20 plus registered and approved parties.

On Friday a second French Language debate was announced that will exclude Green Party leader Elizabeth May whose party has qualified to be included in the main debates.

On Sunday producers for the Democracy Channel and Ottawa Life Magazine asked Dave Rotterman V.P., WNED Buffalo/Toronto, to co-produce the debate scheduled as requested on October 8, 9 or 11, 2019 at the National War Museum, in Gatineau, Quebec using the same sets as the two main debates, as was the case in 1993. If that venue is unavailable then an alternative venue, location city and date may be substituted.

The debate will be co-produced by Gordon Henderson of 90th Parallel Productions and Keith Holding of Media Tribe Interactive, both of Toronto, producers of the 1993 and 2000 Canadian All Party Leaders’ Debates.

MIT Professor Noam Chomsky has agreed to moderate this alternate debate in Canada with Ottawa Life Magazine Publisher and Managing Editor Dan Donovan. (Ottawa Life Magazine is an independent magazine established in 1997 with a large following in the national capital region). The other media panellists will be announced shortly.

In the event that WNED/PBS will not co-produce and carry the event in Canada US border stations Professor Chomsky and Donovan say they will approach RT Russia Today and Al Jazeera English to assist. They produced the US Presidential Third Party debates moderated by former CNN personality Larry King in 2012 and 2016.

The Democracy Channel staged smaller party Leaders’ Debates in the 1993 and 2000 Canadian federal elections that were broadcast by Cable public affairs channel CPAC and the CBC News Channel and simulcast in the Internet on the Democracy Channel® website at DemocracyChannel.net

The CBC only agreed to broadcast the 2000 debate after Democracy Channel founder Greg Vezina threatened to ask PBS border stations to do it. The 2000 debate was recorded in a private studio in Toronto, Ontario.

Debate co-sponsor, Ottawa Life Magazine Publisher and Managing Editor Dan Donovan said, “it is quite incredible that elections in Canada today require the intervention of foreign broadcasters and journalists to be fair and democratic, a sentiment many our neighbours to the south in the USA agree with.

I think we have many problems with representation in our democracy in Canada today and a big part of that is the collusion between big media and the government and the repression of smaller voices by the mainstream media. Prime Minister Trudeau is trying curry favour with journalists by setting up a 600 million-dollar taxpayers funded slush fund to give money to media organizations he deems worthy. You can be sure they will not be reporting on the ideas put forward by smaller political parties or criticizing Trudeau for lying about electoral reform.”

According to recent research and polling in Canada 53% of survey respondents do not support any of the traditional parties and 70% feel government doesn’t care what ordinary Canadians think.

Greg Vezina also founded the None of the Above Direct Democracy Party of Ontario in the 2014 election with eight candidates in 107 ridings or 7.5 percent. Four years later in the recent 2018 election they increased the number to 42 in 124 ridings or 30 percent or ridings, growing faster than the Greens or Libertarians.

The party campaigns on the 3Rs of Direct Democracy – Referendum, Recall and Real electoral and legislative Reforms that give voters control of politicians and parties. Candidates are accountable to their constituents and there are no central party policies or controls of elected MPs beyond the binding Direct Democracy principles.

The NOTA Party will be officially registering with Elections Canada by Friday September 13, 2019. They have already nominated candidates in 45 or 13 percent of the 338 ridings with nominations in progress for more than 200 more.

A copy of the letter to the CEO and CCE asking for a small party debate can be found here:
https://nota.ca/letter-to-chief-electoral-officer-and-commissioner-of-canada-elections/
None of the Above Direct Democracy Party web site: https://nota.ca

Greg Vezina
None of the Above Direct Democracy Party
+1 905-501-0010
email us here
Visit us on social media:
Facebook
Twitter

Noam Chomsky Lecture, May 2018, Noam Chomsky talks about the major threats to the human race and other important issues of today.