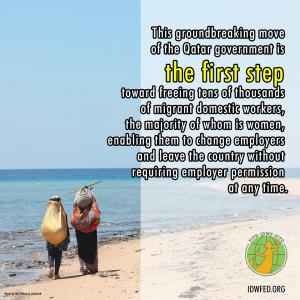 The IDWF welcomes the dismantling of the core Kafala/sponsorship system announced by Qatar government on Oct 17, 2019.

This groundbreaking move of the government is the first step toward freeing tens of thousands of migrant domestic workers.”
— Myrtle Witbooi, President of the IDWF

The sponsorship system, translated to Kafala in Arabic, is a system applied to domestic workers and migrant workers in most Arab countries. Kafala/ sponsorship ties the migrant worker’s legal residency to a sponsor (Kafeel in Arabic) during the contract period, effectively prohibiting the worker from exiting the country, transferring or changing employment, resigning from his/her job, and sometimes leaving the country without the permission of the sponsor/ Kafeel and in his/her case, the employer.

On October 17, the Council of Ministers of the state of Qatar announced the endorsement of “new legislation allowing workers to change employers freely”, cancelling the previous requirement of the No-objection Certificate (NOC) that workers needed from their sponsor/Kafeel to allow them to change employers. Moreover, a Ministerial decree was signed on October 16th, 2019 to remove the Exit Permit for all workers, including migrant domestic workers. The cancellation of the NOC and Exit Permit represents concrete steps toward the abolishment of the Kafala/ sponsorship system in Qatar.

“This groundbreaking move of the government is the first step toward freeing tens of thousands of migrant domestic workers, the majority of whom is women, enabling them to change employers and leave the country without requiring employer permission at any time. This will reduce exploitation of migrant domestic workers as they are no longer bound to employers who are abusive or in situations where their personal safety is at risk” said Myrtle Witbooi, President of the IDWF.

A sustainable employer-employee relationship is based on trust, respect and observance of the contractual terms and standards stipulated in laws (e.g. Qatar Law No. 15 of August 22, 2017, relating to domestic workers) and regulations. There are migrant domestic workers who have worked for the same employers for many years – from 4 to over 10 years in Qatar. According to them, it is precisely such qualities that have maintained their relationships with their employers.

The reforms and previous laws and regulations must now be effectively and fairly implemented. Much depends on the draft laws that are expected to come into force in 2020. Migrant domestic workers and employers must be fully informed of this change. Clear, simple and accessible complaint mechanisms must be put in place for migrant domestic workers. With the support of its partners locally and globally such as the ITUC, Banyanihan migrant workers community in Qatar and the ILO, the IDWF will stand together with the tens of thousands of migrant domestic workers to ensure that they fully enjoy their rights in a Kafala-free community.