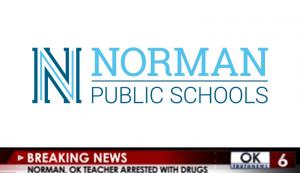 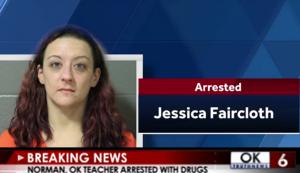 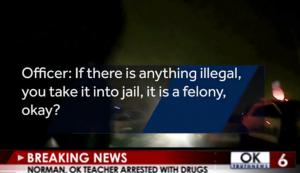 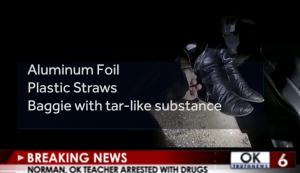 This is what was found by the Officer. 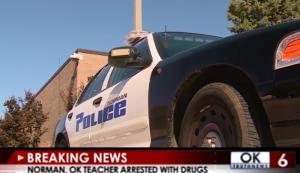 At some point there needs to be more accountability and transparency with the teachers because Oklahoma Public Schools continues to let the kids and parents down!”
— Norman Oklahoma Parent

Faircloth, 37, was arrested less than a mile from the school where she worked. On Tuesday night, Faircloth was in a traffic accident with another vehicle. Police checked Faircloth’s tags and noticed she had an outstanding warrant. As the officer approached Faircloth’s vehicle, the subject was on the phone with her family and said, “I need your help. I just rear-ended somebody, but apparently I have an outstanding warrant from, like, 2012.” The officer noticed a school laptop in the vehicle and asked follow up questions.

Faircloth indicated that she was a third-grade teacher at Norman’s Madison Elementary School. The initial arrest was a result of an outstanding warrant. The officer asked if the Oklahoma Public School teacher was in possession of anything illegal, on her person. After stating “NO”, the officer highlighted that anything found at the jail would result in a felony.

According to KOCO News 5, after conducting an initial search, the officer asked Faircloth if there was anything he missed. “If there is anything illegal, you take it into jail, it’s a felony, OK? Anything in your boots? Anything in your bra line I need to know about?” officer asked. This was Faircloth’s conversation with the officer.
“Uh, yeah, my boots,” Faircloth replied.
“What’s in your boot?” the officer asked.
“Um, there’s a pouch,” Faircloth responded.
After further investigation of court documents, the police officer found a cloth bag inside her right boot containing aluminum foil with burn marks, plastic straws with burned ends, and a baggy with a tar-like substance. The substance tested positive for heroin, according to court records.

Faircloth was arrested for drug possession and on the outstanding warrant. She was charged with two misdemeanors and was released on bond. The judge later ordered her to not use drugs, alcohol or return to the classroom.

Norman Public Schools provided a comment that the district was notified that an employee was involved in a traffic accident outside the school, resulting in her arrest. “During the course of our internal investigation, the employee resigned,” according to the statement.

Did the Norman Public School do a sufficient background check on this teacher to see that she had a criminal record and warrants?

There are a number of teachers that are tied to allegation, arrest and convictions across a wide range of issues from sexual abuse, violence to drug usage is shocking. Parents continue to seek transparency from Oklahoma Public Schools as new allegations arise. Apparently, Norman Public Schools and the Oklahoma Department of Education miss the active warrant which was present during the mandatory background checks. According to the Oklahoma State Department of Education’s Oklahoma Educator Certificate search, Jessica L. Faircloth received her standard certification for Elementary Education on March 1, 2019. The warrant was from 2012 out of Cleveland District Court (Oklahoma) for Driving While Under The Influence (Alcohol) offense code 47 O.S. 11-902(A)(2). Additionally, in 2015, Faircloth plead guilty to petit larceny (offense code 21 O.S. 1706). The need for more teachers in Oklahoma Public Schools must not result in overlooking the background issues that could put the children of Oklahoma at risk.