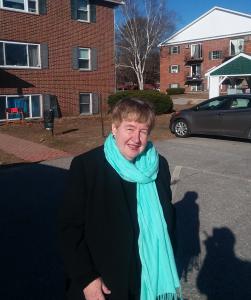 Mary Maxwell, a "hardcore constitutionalist," files as a Republican candidate in the NH presidential primary.

The US Constitution is a miracle that can save us.”
— Mary Maxwell

CONCORD, NEW HAMPSHIRE, UNITED STATES, November 16, 2019 /EINPresswire.com/ — Mary Maxwell filed today, November 15, as a Republican candidate in the NH presidential primary. She is age 72, a conservative, who says her position is "hardcore Constitution."

She lives in Concord, New Hampshire, and plans to visit towns around the state, asking citizens for their suggestions as to what our Republic needs now. Mary Maxwell describes herself as a states' right maniac, urging devolution to the states, and removal of all unconstitutional involvement by the Congress in matters not assigned to the feds per Article I, sec 8. (e.g., education and health).

Mary grew up in Boston but moved to Australia in 1980 for marriage. Her husband, George Maxwell, MD, died in 2000. She came back to the US in 2005, living in Concord, and ran for the House of Reps seat held by Charlie Bass. She got 11 percent of the vote. In 2017 she came to the US again and campaigned for the US Senate seat vacated by Jeff Sessions in Alabama. She lost the nomination to Judge Roy Moore.

In 2017 Mary filed a lawsuit against President Trump — a war-powers case — for his unconstitutional threat to nuke North Korea. She is a graduate of University of Adelaide Law School, with a BA from Emmanuel College Boston, and a PhD in Politics from Adelaide. At GumshoeNews.com, a Melbourne news outlet, she is Opinion Editor and writes a column. Maxwell has produced five plays, all at the Adelaide Fringe Festival.

Among Mary's 14 books are Prosecution for Treason, Fraud Upon the Court, and Consider the Lilies: A Review of 18 Cures for Cancer and Their Legal Status. Most recently she has written Reunion: Judging the Family Court about what she calls "judicial kidnap." The court cases she inspected were mainly in Australia, but the same problem exists in the United States. It is outrageous.

Being hardcore Constitution, Mary wishes to greatly emphasize the beauty of the Electoral College. She will happily address any audience on this topic. Also, she is a die-hard for the Second, Fourth, and Sixth Amendments. Maxwell regularly attends the Gun Owners' meetings at the Holiday Inn in Concord.

Currently, Maxwell is serving as an amicus curiae in the Tsarnaev (Boston Marathon) case which is at the First Circuit Court of Appeals. Her 2019 book on this topic is entitled The Soul of Boston and the Marathon Bombing. Mary wants to wake people up about the fraudulent conviction of Jahar. That book is freely downloadable at GumshoeNews.com.

This week, Mary went to the New Hampshire State House, intending to file as a candidate in the NH primary for the position of US vice president, but was told that recent legislation, alas, has made this no longer possible. So, she stepped up to the higher job!

Please contact her at MAXWELLMARYLLB@gmail.com to arrange an interview. She is mainly interested in talking to locals about reviving the hugely important tradition of "New Hampshire republicanism" — which the rest of the nation badly needs. Mary says: "The Constitution is a miracle that can save us. Honest."