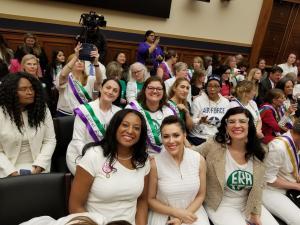 In a watershed moment, both chambers of the Virginia State Legislature have voted to ratify the Equal Rights Amendment (ERA).

We are living in an era of modern constitutional history. Equality for women in this country is long overdue, and the ERA is now one step closer to being integrated into the Constitution.”
— Kate Kelly, Equality Now

NEW YORK, USA, January 15, 2020 /EINPresswire.com/ — Virginia is poised to become the 38th state to ratify the ERA, a pivotal number because 38 states are needed to pass the amendment in order to reach the three-quarters threshold required by Article 5 of the U.S. Constitution.

Nearly one hundred years in the making, this critical step brings the country one step closer to enshrining gender equality into the United States Constitution once and for all.

Kate Kelly, a noted legal expert on the ERA and human rights lawyer at women’s rights organization Equality Now, said: “This is a monumental change almost a century in the making. Countless women have fought to get full constitutional protection, since before women even won the right to vote. We are living in an era of modern constitutional history. Equality for women in this country is long overdue, and the ERA is now one step closer to being integrated into the Constitution.”

Drafted in 1923 by suffragist Alice Paul, the ERA states "equality of rights under the law shall not be denied or abridged by the United States or by any state on account of sex," thereby enshrining gender equality into the United States Constitution.

Passed by Congress in 1972, the ERA then needed to be ratified by three-quarters of the states before it could be added to the US constitution. In 1982 it fell three states short of the requisite 38, and hopes that the ERA would be ratified nearly four decades after it was written, died out.

However, in 2017, led by Senator Pat Spearman, Nevada voted to ratify the amendment. Illinois quickly followed suit in 2018. The resurrection galvanized advocates to make one final push to meet the 38-state requirement. Today, Virginia became that state.

Although monumental, Virginia’s ratification is not the final obstacle to enshrining gender equality into the US Constitution. Once the process moves to the federal level, the original deadline imposed by Congress must be eliminated by Congress or by the courts. Whether the five states that attempted to rescind the ERA were actually able to do so must also be resolved in the courts.

Conservative activists who are vehemently opposed to the ERA have vowed to fight its passage by mounting legal challenges, and in December, the attorneys general of Louisiana, Alabama, and South Dakota filed a lawsuit in federal court to block ratification.

Last week, the Trump administration’s Office of Legal Counsel (OLC) issued an opinion that it was too late to renew the effort to push through the ERA since technically the deadline for ratification of the 1972 vote lapsed in 1982. In the January 8th memo, the OLC claimed that the ratification process would have to begin anew.

Kate Kelly explains: “An OLC opinion doesn't control the actions of Congress nor of the Supreme Court. The OLC is called the ‘President’s Law Firm.’ They issue legal guidance for the Executive Branch. So, the OLChis decision is not binding on the final outcome and is not the last word. A ruling in federal court that the ERA will stand and is still valid would trump this OLC opinion. This is a political question, and will be resolved by Congress and in the courts.”

Human rights attorney Kate Kelly presents the ERA focused podcast Ordinary Equality, which charts the journey of the amendment from when it was first passed, later failed and then resurrected, and now has the potential to change US history once and for all. Ordinary Equality explores the untold stories of the revolutionaries, the activists, the dissenters, and so much more, all set against a comprehensive framework of US legal, political and cultural context over the last century.

About: Equality Now is an international human rights organization that works to address and eliminate all forms of discrimination and violence against women and girls by combining grassroots activism with international, regional and national legal advocacy. Its global network of lawyers, activists, and supporters achieve legal and systemic change by holding governments responsible for enacting and enforcing laws and policies that end legal inequality, sex trafficking, sexual violence and harassment, and harmful practices such as child marriage and female genital mutilation.