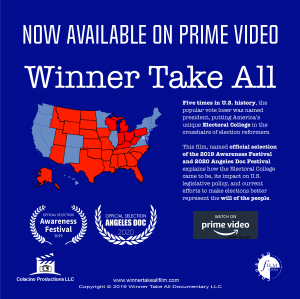 Watch “Winner Take All” on Prime Video in the U.S. and UK.

“Winner Take All,” a film about the U.S. electoral system, was named “official selection” in the category of Best Documentary Short

what most people don’t realize is that the winner-take-all rule exists nowhere in the Constitution. It’s a pure creation of the states.”
— Editorial Board of the New York Times

“Winner Take All” explains how the frequently misunderstood Electoral College works, and how the allocation of electoral votes has resulted in the loser of the popular vote being named president five times in U.S. history. “The problem isn’t the Electoral College itself” says filmmaker, Don Colacino. “It’s the way states have chosen to allocate votes.” The Editorial Board of the New York Times (nytimes.com, @NYTopinion, facebook.com/nytopinion) concurs, writing in August 30, 2019 column that “what most people don’t realize is that the winner-take-all rule exists nowhere in the Constitution. It’s a pure creation of the states.”

This is the second festival to recognize the film in the lead-up to the 2020 election. “Republican presidents have supported changing the Electoral College, and Democratic presidents have been opposed to it, so it’s not really a partisan issue. To ensure that the film is grounded in fact, I’ve gone back to the founding documents and shown, on screen, exactly what they say” says the Colacino. The filmmaker is based in Colorado, which last year signed a National Popular Vote Interstate Compact bill into law. The compact changes the way the state’s electoral votes will be allocated in the future, with no change to the Electoral College itself.