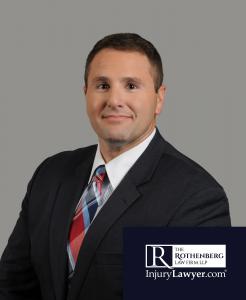 PHILADELPHIA, PENNSYLVANIA, UNITED STATE, February 14, 2020 /EINPresswire.com/ — The Rothenberg Law Firm is pleased to report that one of its top catastrophic personal injury attorneys, Franklin Strokoff, obtained a jury verdict in the amount of $3,146,500 on behalf of a 79-year-old client who sustained hip injuries after falling at a movie theatre.

The incident occurred on March 1, 2016, after his client entered a dark movie theater following the start of the film.

When the client attempted to locate her seat, she fell as a result of an unlit/ unmarked step that she didn’t see.

Investigation revealed that another moviegoer reported falling on the same step two days prior to Mr. Strokoff’s client’s incident.

Mr. Strokoff’s client was transported to a local hospital by ambulance and was treated for a left hip fracture that resulted in multiple surgeries and permanent damage.

After a five-day trial in Philadelphia, the jury found the theater chain to be 100 percent negligent. The theatre chain made no offer prior to the verdict.

If you or a loved one have unjustly suffered a personal injury, The Rothenberg Law Firm LLP has the extensive resources needed to aggressively litigate your case.