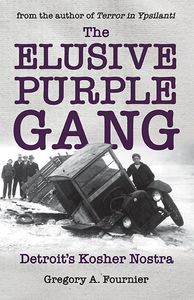 The Elusive Purple Gang by Gregory A. Fournier

On the 100th anniversary of Prohibition, author releases book about the only Jewish gang in Detroit, Michigan to ever dominate the rackets

Dynamic, well-written, and well-researched, Gregory gives the reader a view of one of the most intriguing periods of our time.”
— Fran Briggs

LOS ANGELES, CA, AMERICA, February 18, 2020 /EINPresswire.com/ — The Elusive Purple Gang: Detroit’s Kosher Nostra, by Gregory A. Fournier has been named among "The Best of Winter Reading, 2019-2020,” his publicist announced today.

American publicist, Fran Briggs, also recognized nine additional authors across the globe to form the annual list. Genres include inspirational, spiritual, mystery, sci-fi, children’s, romance, and health and wellness. Consideration as an honoree was initiated by submissions from each author, or their agent.

One century ago, on January 19, 1920, the United States embarked on what was termed, a “Noble experiment.” The aim was to prohibit the manufacture, transport, sale, and importation of alcoholic beverages within the country’s borders.

With a long history of support by anti-saloon leagues and Protestant reformers, national Prohibition was intended to eliminate public drunkenness, improve the domestic life of women and children, and increase the productivity of the American workforce.

Despite what appeared to be well-meaning, objectives, Prohibition unleashed a backlash of opposition resulting in unforeseen consequences leading to the establishment of a nationwide crime network called the Syndicate.

“The Elusive Purple Gang: Detroit’s Kosher Nostra” is an insightful account of the infamous, Purple Gang—one of America’s most notorious and violent Prohibition gangs.

Fournier says that “The Purple Gang was the only Jewish gang in the United States to dominate the rackets of a major American city. From their meteoric rise to the top of Detroit’s underworld; to their ultimate demise, this book is an episodic account of the Purple Gang’s corrosive pursuit of wealth and their inevitable plunge towards self-destruction.”

"The Purple Gang brilliantly depicts the rise and fall of one of America’s most notorious organizations,” stated Fran Briggs, Publicist to Gregory A. Fournier. “Dynamic, well-written, and well-researched, Gregory gives the reader a view of one of the most intriguing periods of our time. It's certain to continue to raise eyebrows.”

ABOUT GREGORY A. FOURNIER

Literary Classics gold medal award-winning author, Gregory A. Fournier, received his bachelor and master’s degrees in Language Arts from Eastern Michigan University in Ypsilanti. An avid writer of creative nonfiction, “The Elusive Purple Gang” is Fournier’s latest book. His other titles are “Zug Island,” “Terror In Ypsilanti,” and The Richard Streicher Jr. Murder.” "The Elusive Purple Gang" also earned honors for its book cover. It was designed by Micah Edel. For additional information, including how to purchase his books, please visit www.gregoryafournier.com, or call (619) 449-8026.