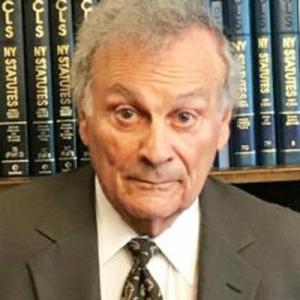 Since 1960, Parone has dedicated his practice to servings his clients in the areas of divorce and family law, as well as corporate and real estate law.

Parone says he was guided toward the law by his uncle. He credits his success to his experience. He’s proven over and over to be fair and that his clients can trust him.

I enjoyed going to court, resolving issues between parties and getting things done. Above all, I enjoyed trying to convince the judge that I was right and my opponent was wrong.

In the 1960s, Parone focused mainly on corporate work, which involved everything from lawsuits to real estate to board of directors meetings. Prior to establishing the Law Office of Anthony D. Parone, he served as general counsel for Conbow Corporation in Niagara Falls, and assistant general counsel with National General Corporation in Los Angeles, CA, from 1965 to 1966. He was an associate attorney with Saperston, Wiltse, Duke, Day & Wilson in Buffalo, NY from 1966 to 1968 and a lawyer at Gellman & Gellman from 1961 to 1965.

Parone says he is currently focused on title searches, including one that goes back to 1910.

Parone maintains affiliation with the Niagara County Bar Association and is a former member of the Bar Association of Niagara Falls, where he served as president in 1983.

Though he is no longer active in the association. He says he enjoyed the camaraderie, even with lawyers who would one day be his opponents in court.

“Some days they're your worst enemy and other days they can be your friend and you can sit down and have a drink with them,” says Parone.

At 85, and still in very good health, Parone says his goal is to keep practicing as long as he can.

Asked if there is one lesson he could impart to the audience, he says, “If you're young or in college, think about going to law school. It's an interesting life.”

Listen to the show on BlogTalkRadio