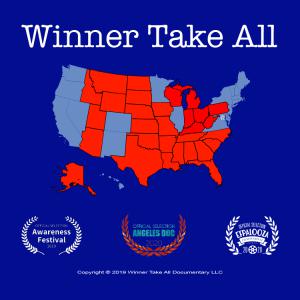 “Winner Take All,” a film about the U.S. electoral system, will be shown on Denver’s PBS12 in June.

DENVER, COLORADO, USA, May 26, 2020 /EINPresswire.com/ — PBS12 (https://www.pbs12.org, https://www.facebook.com/PBS12.CO, https://twitter.com/PBS12_CO) has added the documentary film, “Winner Take All” (winnertakeallfilm.com), to its June program lineup. The film explains how the frequently misunderstood Electoral College works, why its election results have conflicted with the popular vote, and Colorado’s effort to join a compact with other states to prevent such conflicts in the future. The broadcast is particularly timely since a referendum to repeal the legislation will appear on Colorado’s November ballot.

“There’s a lot of confusion around how the Electoral College works and what our founders designed it to accomplish,” says filmmaker, Don Colacino. “Many people believe it advantages one party over another, or that it ensures that voters in rural areas have an equal voice, but when you look at the details neither of those things are true. Both Republicans and Democrats have at various times supported a popular vote, and it was the compromise of a bi-cameral Congress that was designed to allay the concerns of less-populous states.”

“The National Popular Vote Interstate Compact doesn’t “drop” the Electoral College nor does it perform an “end run” on the Electoral College,” wrote Michael Steele, former chairman of the Republican National Committee in a letter published in The Wall Street Journal on February 20, 2020. “The National Popular Vote Interstate Compact is constitutionally consistent. It also, importantly, makes every voter in every state politically relevant.”

Colorado's Senate was the first state legislative house in the nation to pass a National Popular Vote bill in 2006, with bipartisan support. The Colorado House passed it in 2009, but both branches must pass a bill within two years for it to reach the Governor’s desk for signature. That happened in 2019, but opponents immediately filed a referendum against it.

About PBS12
PBS12 (formerly Colorado Public Television, CPT12) is a different kind of PBS station. We’re your neighbor. We’re rooted in independence and diverse viewpoints. We champion diverse voices, celebrate community, delight audiences, and expand perspectives for all Coloradans. We promise to be PBS in a whole new way. PBS12 is on-air on channel 12 (over-the-air and on DirecTV and Dish) on Comcast channel 660 in Denver and throughout Northern Colorado and Mountain communities. In Colorado Springs and Pueblo, PBS12 is on channel 12 (over-the-air) and on Comcast channel 712. Online, PBS12 is available at http://www.pbs12.org, on Facebook, Instagram, Twitter, and YouTube, and on-demand at video.PBS12.org.