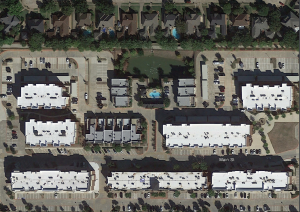 The widespread damage was felt by thousands of property owners and will remember for years to come.

DALLAS, TEXAS, UNITED STATES, July 31, 2020 /EINPresswire.com/ — Nestled on the south side of the western edge of Lewisville Lake rests the City of Highland Village. This suburb of north Dallas is known for its annual hot air balloon festival and its summertime firework shows. The region is also known for its history of wind damage and hailstorms.

Hailstorm Thrashes Denton County Costing Millions
On Sunday night, March 26, 2017, a powerful hailstorm (fueled by an abnormal amount of moisture from the Gulf of Mexico) blew through Denton County, Texas, wreaking havoc as it passed through. Hail measured up to four and a half inches across was witnessed by residents. For comparison, a softball is four and a quarter inches across. Thousands of property owners reported severe roof damage, along with busted-out skylights and windows. The majority of the property damage occurred in fifteen minutes after 8 p.m. that night. The hailstorm was reported to be so bad, one Fire Chief’s windshield was destroyed and he had to leave his vehicle and take shelter in an abandoned building for protection.

Our client’s newly constructed, multi-use commercial complex (or town center), which consisted of shops, stores, a leasing office, and apartments experienced the full force of the hailstorm. A total of eleven roofs (4 TPO, 3 modified bitumen, 2 three-tab shingle, and 2 laminated composition shingle), and all the roof-mounted HVAC equipment and accessories were damaged beyond repair or destroyed. The fact that these new roofs had to be replaced is a testament to the property damage that occurred.

Quadrupling The Award Is The Reward
AmGuard Insurance responded to our client's insurance claim by sending out their adjustors who substantially undervalued the damage. Knowing AmGuard's inspection results did not represent reality, our client hired us to represent them against their insurance carrier. After our representation concluded, our client had ample funds to replace all eleven damaged roofs and acquire new HVAC equipment for the complex as well as reimburse litigation expenses and pay the firm's fee.

Texas Property Insurance Lawyers
Has your homeowner’s or commercial business insurance claim been denied? We can help. Representing thousands of client’s against big insurance companies, our insurance claims attorneys aggressively protect the rights of the policyholder. Our consultations are free, and you owe us nothing until we win your case. Contact us today.