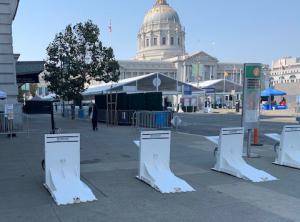 Now people can come here to vote and be confident they are well-protected.”
— Meridian CEO Peter Whitford

SAN FRANCISCO, CA, UNITED STATED, October 13, 2020 /EINPresswire.com/ — The city of San Francisco is making voting during the coronavirus pandemic as easy and safe as possible by bringing in Meridian Rapid Defense Group to ensure a secure voting area.

Tents with voting equipment have been set up behind a line of Archer 1200 mobile vehicle barriers at The Voting Center located outside of the Bill Graham Civic Auditorium – creating a space easily accessible for pedestrians but not vehicles.

The newly-created, secure pedestrian plaza was visited by San Francisco Mayor London Breed. “There will be a lot of people coming here. And to make sure everyone has a safe and accessible place to cast their ballot, we created this outdoor voting center,” she said.

"There is no excuse now for anyone in the city who is a registered voter not to vote," said the mayor.

The Department of Elections has been preparing for record voter turnout as evidenced by the massive facility which can accommodate 200 voters at a time. The Voting Center was produced with Hartmann Studios and vehicle security including placement of Meridian's Archer 1200s was executed through TriCal Rentals. Early voting began October 5th.

Meridian CEO Peter Whitford explained how the Archer barriers were the perfect fit for the job. “These barriers replaced the wooden and light metal barricades that were here originally. In fact, they provided no protection at all for the large crowds expected. They wouldn’t have stopped an out of control car entering the zone. But now people can come here to vote and be confident they are well-protected.”

Meridian Rapid Defense Group has been working in other parts of the U.S. to create similar safe voting zones.

The American-made, steel barriers, capable of stopping a car or truck at lethal speeds, are also being used to create safe outdoor dining zones for restaurants. As well, the Archer barriers were used to protect health workers at drive-thru COVID-19 testing stations.