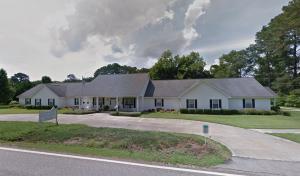 ALBANY, GA, USA, October 29, 2020 /EINPresswire.com/ — On October 11th, 2018, Hurricane Michael impacted Dougherty County, Georgia. What was the first Category 4 hurricane to hit the US mainland in over a century slowly progressed through Florida into George, where it became a Category 3 by the time it reached the city of Albany. The wind damage was more severe than the damage sustained in Hurricane Irma from a year previous, with wind gusts reaching over speeds of a hundred miles per hour. Many trees had been knocked down along with several businesses losing their facades and an abundance of road debris. The hurricane damage was so bad that residents were asked to stay inside. More than ninety percent of Albany’s Utilities Authority’s customers (24,000+ people) woke up Thursday morning with no power.

In the path of the storm was our client, a nursing home. Wind-blown debris brought on extensive roof damage along with exterior property damage to the siding, gutters, and HVAC units. This region has a history of property damage going back as far as 1845, so for the residents of the area getting used to property damage has become routine. What is also routine is how our client’s insurer responded to the commercial business insurance claim.

Some insurance companies are allowed by the state to have shorter deadlines than the state’s law allows if the parties involved can agree. Georgia’s laws have a general two-year statute of limitations, but per our client's insurance policy they were only allowed one year to file a lawsuit.
Thirteen days after the one-year limitations period, the insurance company sent our client a claim determination letter stating they had completed their review and determined there was no coverage. Later, we filed suit on behalf of our client. The insurance company responded with a motion to dismiss – claiming we filed suit more than a year after the date of loss. Our response to the court was that we did not have the right to sue until after the determination letter was received by our client and therefore excused from the one-year statute of limitation and the court should disregard the one-year statute of limitations.

If your commercial business or homeowner insurance provider has denied, delayed, or underpaid your insurance claim, then we can help. The experienced attorneys at Chad T. Wilson Law Firm have represented more than a thousand clients in cases against insurance companies. Our property insurance lawyers aggressively protect the rights of insurance policyholders. Our consultations are free, and you owe us nothing until your case is won. Contact us today to see how we can help.