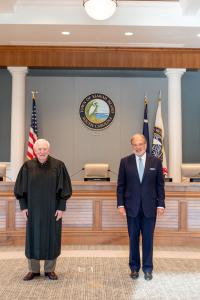 As firm celebrates a successful year, Sanford Ain is sworn in as municipal judge

We are so proud of Sandy’s appointment. We’re also thankful to have his continued support and guidance within the firm as we continue to grow.”
— Natalia Wilson

WASHINGTON, UNITED STATES , January 12, 2021 /EINPresswire.com/ — Sanford K. Ain, principal and founder of Ain & Bank, P.C. one of the top family law services firms in the country, was sworn in last week as a municipal judge for the Town of Kiawah Island, South Carolina. He replaces Judge John Strauch who is retiring. Court is held two to four consecutive days each month.

This appointment comes as Ain & Bank celebrates a record year. While Ain plans to remain just as involved with the firm as past, the firm announced several new hires and appointments. Natalia Wilson and Sarah Mancinelli have been made equity partners; Matthew Edwards has been promoted from senior associate to partner; Pernell Choren has been promoted to senior associate and Catherine Thompson has joined the firm as an associate.

Following his swearing in, Ain addressed those in attendance and on livestream by explaining that he initially fell in love with Kiawah when he and his wife honeymooned there 40 years ago. He also said that, as he gets on in age, “The most valuable thing we have, besides our health, is our time. I am honored to be part of those preserving and enhancing the beauty and security of this island we all cherish.”

He thanked his family and the other principals of his law firm for having supported him in his pursuit of the part-time position with a three-year term.

“We are so proud of Sandy’s appointment,” said Natalia Wilson, who has been at the firm for more than 10 years and is managing partner. “We’re also thankful to have his continued support and guidance within the firm as we continue to grow.

For more information on the firm, visit www.ainbanklaw.com.