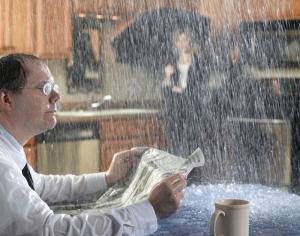 It’s raining in the kitchen

As Texas recovers from the arctic blast, pipe problems will remain an issue for many Texans. San Antonio alone reported more than 10,000 claims related to frozen pipes or pipe leaks. In Houston, city and county leaders on Friday said tens of thousands of area residents and business owners suffered burst water pipes or other damages from the winter storm, Uri, resulting in property damage likely costing tens of millions of dollars. A federal disaster declaration, which President Joe Biden said he will sign, could free up money to reimburse affected residents, as well.

When it comes to water leaks from broken or frozen pipes, our attorneys have in-depth experience handling these types of denied homeowners insurance claims. One client of ours, from the Dallas area, experienced a pipe burst in their upstairs bathroom which caused water damage to the first floor of their home.

Initially, their insurer (Farmers Insurance) sent an adjuster that determined that the damage could be repaired for the cost of their deductible. When our client's questioned the insurance about this estimate, they hired an engineer to back up their first adjuster's findings. Unable to make the necessary repairs with this amount, our client hired us to represent them and go after their insurer for a full recovery.

Our third-party adjustor found damage to the flooring and a kitchen cabinet, thousands of dollars in damage, that the original adjuster and engineer missed. Upon receipt of those findings, we filed suit with Farmers Insurance. With the evidence collected our case was stronger than the insurer wanted to contend with and ultimately settled out of court. Originally the insurer had agreed to cover the cost of the sheetrock, but after our findings, we were able to get them to pay enough to cover the cost of the damaged flooring and kitchen cabinetry. We were able to secure the essential funds for our client to make the necessary repairs to their home and get back to life as usual.

Texas does not see cold weather like what we just experienced. Our infrastructure was not ready for the intense cold. Many homes experienced catastrophic damage to their homes and property. To battle the slew of misinformation out there, here are a few things you should know about frozen or broken pipes in general.

What You Should Know
Homeowners insurance typically covers damage that results from broken pipes.

What if my house is flooding? Water damage from a pipe burst is typically covered under a homeowner's policy. Flood water damage, including excess groundwater, is not covered by a typical homeowners or renters insurance policy. The homeowner needs a separate flood insurance policy to claim damage on the effects of water egressing or discharging back into the home.

What if I rent? Renters insurance should cover water damages to your personal property from broken or ruptured pipes, but if damages are caused by water backing up in a drain or suction pump you will not be covered without having purchased additional coverage. Renters do not usually need to worry about the damage to their homes. That should be covered by their landlords' insurance policy.

What if my ceiling collapses? Homeowners insurance does cover sudden and accidental water damage that may result in interior damage. One reason that insurers may deny a claim would be if a filer knew about prior structural decay or damage in the home before the collapse.

Texas Property Insurance Lawyers
Has your homeowner’s or commercial business insurance water claim been denied? We can help. Representing thousands of client’s against big insurance companies, our insurance claims attorneys aggressively protect the rights of the policyholder. Our consultations are free, and you owe us nothing until we win your case. Contact us today.