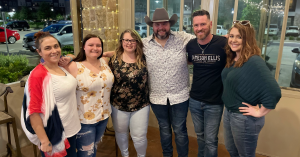 There is an agenda to turn Texas blue at all costs, but it's very subtle. Texas is a proud state and if it were to flip suddenly, everyone would know something wasn't right.”
— Jameson Ellis

CONROE, TX, UNITED STATES, July 20, 2021 /EINPresswire.com/ — After starting a petition back in June of 2021 to call on Texas legislators to conduct a forensic audit of the 2020 election results, it appears Jameson Ellis and his supporters may have caught the attention of Texas State Representative Steve Toth (R-The Woodlands).

Only a few short weeks after their petition was started, Representative Toth filed HB 241.

Sources have told Jameson that the election reports that were shown on November 3, 2020, were grossly misleading and inaccurate.

"If you think the fraud in Arizona or Georgia was bad, they don't have anything on Texas," Jameson said.

In the fall of 2020, Project Veritas released a video exposing a woman harvesting votes in San Antonio leading up to the 2020 election. On June 6, 2021, the Epoch Times released an article that revealed over 500 election fraud cases that are pending in Texas courts. Later that month, Jameson filed the petition.

"We believe that Texas should be leading the way in these audits. I've talked with a few constituents that have a hard time understanding the need for an audit because Texas stayed red," Jameson said. "But most people get it. There is an agenda to turn Texas blue at all costs, but it's very subtle. Texas is a proud state and if it were to flip suddenly, everyone would know something wasn't right."

Jameson and his campaign team believe the left's strategy is to slip in more and more blue votes, over time, to make it more realistic and believable.

Texas AG Ken Paxton said that “voter fraud is real” and that “Texans deserve to know their vote is legally and securely counted.”

"We must continue to fight and garner support for HB 241," Jameson said. "My team and I will continue to do whatever is necessary to preserve our God-given liberties and ensure our elections are transparent and secure."

The goal of HB 241, which has been titled the Texas Voter Confidence Act, is to see the forensic audit started by November 1, 2021, and completed no later than February 1, 2022.