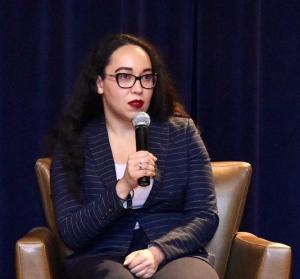 Tina M. Patterson, Esq., is the President and Director of Research at The PuLSE Institute, Detroit’s national anti-poverty think tank.

Floyd’s murder forced every system and institution under a microscope to deeply examine the centuries of racism and discrimination that have continued to enslave Black socioeconomic progress.”
— Attorney Tina M. Patterson, Esq.

A prolific writer, Attorney Patterson regularly contributes columns published by the Institute that challenge the perceptive failures of government leadership to combat debilitating quality of life issues such as poverty and racial inequality. Patterson has also contributed her legal expertise and advocacy skills to The PuLSE Institute, authoring an amicus brief before the United States Sixth Circuit Court of Appeals in support of the groundbreaking right to literacy for Black schoolchildren in Detroit in the historic Gary B. v Whitmer case. Her consistent support of the case in publicly advocating for poor school children in Detroit in her capacity as leader of The PuLSE Institute helped the plaintiffs in reaching a favorable settlement with the state in the case.

News of Patterson’s anticipated book on race and American jurisprudence is coming after the historic guilty verdict of former Minneapolis Police Officer Derek Chauvin and his sentencing of 22 years in prison for George Floyd’s murder, as the country is reexamining the use and application of the law in our elusive pursuit of equal justice under law.

“The clash between race and our legal system is a centuries old problem, that after worldwide uprising, is once again front and center,” Patterson said. “Floyd’s murder led not only to immediate demands for police accountability and criminal justice reform, but forced every system and institution under a microscope to deeply examine the centuries of racism and discrimination that have continued to enslave Black socioeconomic progress.”