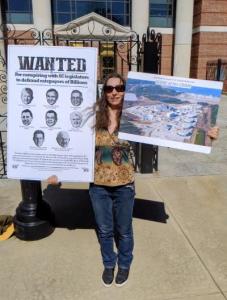 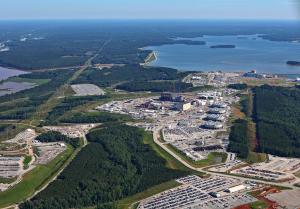 This is certainly a sad day for South Carolina when we consider what $11 billion could have done to put South Carolina on a path toward clean energy and combating climate change.”
— Tom Clements, Director, Savannah River Site Watch, Columbia, SC

COLUMBIA, SC, US, October 4, 2021 /EINPresswire.com/ — The former CEO of the SCANA Corporation, the utility responsible for the massive failure to construct new nuclear power reactors at the V.C. Summer site in South Carolina, is to be sentenced on October 7, 2021 at 10:00 a.m. in federal court in Columbia, South Carolina.

On October 4, lawyers for former CEO Kevin Marsh, filed a "Sentencing Memorandum," which made the case for a $5 million fine and 24 months in prison, a possible punishment which had been revealed in earlier court filings by the federal attorney for South Carolina. The lawyers are hoping the judge goes easy on Mr. Marsh as they claim he cooperated with federal authorities as stipulated in a plea agreement.

Tom Clements, director Savannah River Site Watch, said "While the court should show mercy concerning the prison sentence, Marsh should face a far higher fine as he made much more money from the project than the proposed fine. Particularly as Marsh has not apologized to the people of South Carolina for the damage done to the state as a result of his criminal actions, any fine levied should be doubled as long as he refuses to apologize."

The "Sentencing Memorandum" and 10 letters of support of Marsh are posted on the Savannah River Site Watch website: https://srswatch.org/.

As recorded in a news release by the federal attorney's office, Marsh pleaded guilty to felony fraud on February 24, 2021 for his role in the failed construction of two Westinghouse AP1000 reactors by the SCANA-owned electric utility South Carolina Electric and Gas (SCE&G). The project was terminated by SCANA and its junior Partner, Santee Cooper, in July 2017. Due to the financial overreach of a small utility and endless construction problems and schedule delays, SCANA went bankrupt. Dominion Energy took over SCANA in early 2018. $11 billion was wasted on the project and Dominion will be collecting payment for the project from its customers for another 17 years.

Clements authored an opinion piece entitled "US attorney details illegal acts in construction projects, sealing the fate of the “nuclear renaissance," which appeared on August 31, 2021 in the Bulletin of Atomic Scientists. The article outlines that one other SCANA official, former COO Stephen Byrne, and two Westinghouse officials who have been charged in the monumental failure of the V.C. Summer project. Byrne pleaded guilty, as did Carl Dean Churchman of Westinghouse. The other Westinghouse official, Jeffrey Benjamin, has pleaded not guilty and may well face a hostile jury selected from former SCE&G rate payers.

"While some form of justice will be served with the sentencing of Marsh, this is certainly a sad day for South Carolina when we consider what $11 billion could have done to put South Carolina on a path toward clean energy and combating climate change," said Clements. "The SC PSC rubber stamped the misguided nuclear project and was swept out of office for it. The new PSC must never again sell itself out to utilities pushing projects like this which undermined the pursuit of clean energy," added Clements.

Across the Savannah River in Georgia, the construction of twin AP1000 reactors continues by Southern Company. The project has run far over budget and has fallen far behind schedule. Together, the poorly managed V.C. Summer project and the Vogtle project have dealt a crippling blow to nuclear power in the U.S., according to SRS Watch.

SRS Watch will continue to monitor the status of charges against others guilty in the V.C. Summer debacle. The organization will remain focused on opposing the construction of the proposed Plutonium Bomb Plant (PBP) at the U.S. Department of Energy's Savannah River Site in South Carolina. That facility, to be located in the canceled plutonium fuel (MOX) building at SRS, would make 50 or more plutonium pits per year for new nuclear weapons, beginning with pits for the W87-1 warhead for the unneeded and provocative Ground Based Strategic Deterrent. The estimated cost of the PBP this year has doubled to $11 billion and is already facing a 5-year delay. As $8 billion has already been sunk into the MOX boondoggle, adding another $11 billion on top of that could very well mean that the building would be among the most expensive in U.S. history. In an opinion piece in The Hill publication on September 15, 2021, entitled "Stumbling plutonium pit project reveals DOE's uphill climb of nuclear modernization" (https://thehill.com/opinion/energy-environment/572477-stumbling-plutonium-pit-project-reveals-does-uphill-climb-of), SRS Watch's Clements laid out why ill-conceived plans for expanded pit production should be rolled back by Congress.