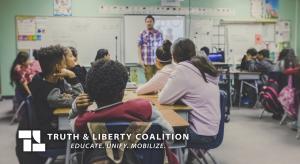 Important local elections are coming this November and they will affect communities at their very core.

In many communities, candidates are running for local school board seats who, if elected, will make important choices about their children’s education

There’s thousands of races happening, and probably most people will have an opportunity to go vote in some type of municipal or school board race.”
— Jason Yates of My Faith Votes

WOODLAND PARK, COLORADO, UNITED STATES, October 5, 2021 /EINPresswire.com/ — Important local elections are coming this November and they will affect communities at their very core.
It is critical that conservative voices are heard at the polls since these elections will drastically impact the day-to-day lives of regular citizens, according to a guest on a recent Truth & Liberty Coalition livecast.

“There’s thousands of races happening, and probably most people will have an opportunity to go vote in some type of municipal or school board race,” said Jason Yates of My Faith Votes on the Truth & Liberty Coalition (T&L) livecast. “In those races . . . our vote counts exponentially.”

According to Yates, turnout in Denver, Colorado, for local elections in 2019 was about 40 percent, while turnout in the 2020 general election was estimated at over 85 percent. With a lower projected turnout for this year’s election, every vote counts “so much more,” said Yates.

In many communities, candidates are running for local school board seats who, if elected, will make important choices about your children’s education and your parental rights, he said.

This year’s school board elections are more important than ever. Due to the pandemic, government-mandated school closures sent students home for months, forcing them to try to learn online. During that time, parents everywhere saw for themselves what their children were learning (and not learning) in public schools. Instead of just math and science, students were being indoctrinated with harmful leftist ideology, Yates said.

Over the past several months, concerned citizens have flooded school board meetings across the country, protesting curriculums based on critical race theory and anti-American propaganda, exposing pornographic materials in school libraries, and taking a stand against oppressive lockdowns and mandates. according to a Truth & Liberty Coalition official.

For conservative Christians with strong biblical values, it’s important to know which candidates and issues to vote for. Truth & Liberty Coalition encourages you to “do your homework” and research what is on the ballot this year. Visit ChristianVoterGuide.com, and iVoterGuide.com to access digital voter guides, find the guide for your county and community, and then share them with your friends, family, neighbors, pastor, and church. For those who don’t have voter guides for this year’s school board and other local elections, Truth & Liberty executive director Richard Harris recently shared how you can get informed about your candidates.

On Nov. 2, your vote will make a difference for your community. Make the right choice and vote according to biblical values, Harris said.

About Truth and Liberty Coalition: Truth & Liberty Coalition, Inc. is a 501(C)(4) non-profit based in Woodland Park, Colorado. Established by Andrew Wommack and other Christian leaders, the goal is to educate, unify and mobilize Christians and conservatives to become involved in the affairs of their community and government. The Coalition provides information to its viewers through weekly live streams featuring various influential guests. Their website houses numerous resources that connect visitors with many organizations across the nation with whom they can partner. Their goal is to enable ordinary citizens to make an impact in their local areas. Find Truth & Liberty Coalition on Facebook and on Twitter.

About Andrew Wommack:
Andrew Wommack is president and founder of the Truth & Liberty Coalition, Andrew Wommack Ministries, and Charis Bible College. He and other Christian leaders established the Truth & Liberty Coalition to educate, unify and mobilize believers in Jesus Christ to affect the reformation of nations through the seven mountains of cultural influence. Since 1968, he has taught God’s Word with clarity and simplicity, emphasizing the unconditional love and grace of God. His vision is to spread the Gospel as far and deep as possible through his daily Gospel Truth television program, broadcast nationally and internationally, as well as through GospelTruth.TV, his internet television network.