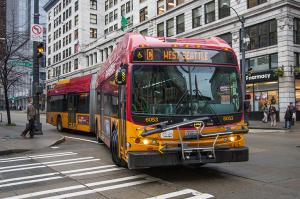 Bernard Law Group is representing the victim of the hit-and-run bus accident that left her with life-altering injuries that will require lifetime medical care.

In March, a veteran Metro driver drove her bus onto a sidewalk and over the victim’s leg near the Renton Transit Center, where Chapel was lying on a sidewalk away from the street. After the accident, the driver exited the bus to check on the victim three times and called for help. However, she cancelled the call for aid as she drove away, leaving the helpless victim alone at the scene.

“In my 40 years of practicing as a personal injury lawyer, I’ve never heard of facts so outrageous and egregious. The idea that a professional driver, a Metro driver, could roll a bus over a human being—then talk to her, leave her in a pool of blood, dying, bleeding out,” said Bernard.

“It’s unimaginable she could do what she did, see what she saw, all those times she went back to check on Jessica, and leave. And not just leave, but cancel the only help that was coming for her,” added Vanderslice.

"The expectation is that, both by King County and by law, she needs to stay on the scene, get aid there and then wait there until she is cleared to leave by police," she added.

The bus driver resigned during the investigation. She now faces criminal hit-and-run charges and is expected to go on trial later this year.

Chapel is suing in civil court to help pay for her medical expenses.

The Bernard Law Group has been a nationally recognized personal injury firm for over 30 years representing victims of catastrophic accidents and serious injuries.